The Cincinnati State Archives, along with the entire college community mourns the passing of former president Frederick Schlimm. 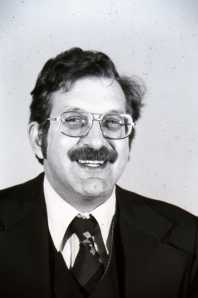 Schlimm began his career at Cincinnati State (then known as the Cincinnati Cooperative School of Technology) on Jan. 29, 1968 as Director of Admissions and Records. At the time, he once wrote, the institution was housed in a small corner of Courter Technical High School, and was a post-secondary arm of Cincinnati Public Schools with just four academic programs and about 120 students.

Schlimm was promoted to a variety of positions, including Vice President of Academic Affairs and Vice President of Administrative Operations, before he was appointed president of what by then had become Cincinnati Technical College, succeeding its first president, Clifford House.

Under Schlimm’s leadership the college doubled in size, from about 2,000 students to more than 4,000, and the number of academic program offerings increased to 45.

“Fred was one of the people who laid the foundation for the Cincinnati State we know today,” said Cincinnati State’s current president, Dr. O’dell M. Owens. “In many respects, he was a visionary educator.”

Paul Callahan, an emeritus professor who has served under every president at Cincinnati State, described Schlimm as “one of the founding fathers” of the school.

“Fred had a passion for technical education, and co-op, and for this college. It was more than a job, it was passion, it was his life,” Callahan said.

He and others familiar with the early history of the college credited Schlimm with guiding its transition from a post-secondary institution rooted in the Cincinnati Public Schools system into an independent, fully-formed technical college.

““He brought people in from all over the country into positions where he thought they could do the best to help the college,” said Michele Imhoff, former associate vice president for marketing and communications at Cincinnati State.  “He helped take it from post-secondary into real higher education.”

Among the notable developments during Schlimm’s tenure:

In September 1978, the new LRC opened to the public. In this picture, President Frederick Schlimm watches Johnnie Mae Berry place the first library book on the shelf. 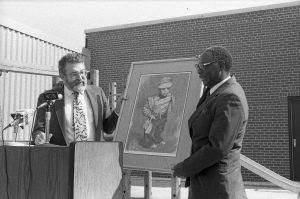 This is the official blog of the archives of Cincinnati State Technical & Community College. The blog will highlight important photos, documents, exhibits, and other items which chronicle the history of Cincinnati State.
View all posts by Cincinnati State Archives →
This entry was posted in Presidents and tagged Schlimm. Bookmark the permalink.