The Aviation Technology program started in Cincinnati State’s second year, 1970-1971. At the time, the college was one of only a handful of schools in Ohio providing aviation maintenance training. The new program was championed and designed by Professor Tony Rinck (seen in the plaque below). It included aviation-specific courses like Basic Aerodynamics, Aircraft Electrical Systems, and Flight Line Maintenance along with related academic courses like Physics, Communication Skills, and Technical Writing. The program also included 3 co-op terms with area employers.  Below is a description of the program from the 1971 Catalog. Check out an early Aviation Maintenance Technology admission brochure mailed to potential students in the 1970’s. Below is a description of the program from the 1971 Catalog. Click on the photos to see larger version.

With the addition of the 2 trainer planes donated by the Navy, the College decided to convert its football stadium (Trechter) into an “airport” and use the sports booth as the “control tower”. Students in the aviation technology program used the planes and the field facilities to learn the art of maneuvering an airplane on the ground, called taxiing. Trechter stadium continued to be used for athletic events at the college. During this time, the College also had plans to build a hangar at the corner of Trechter field which would serve as the hands-on aviation training center for the next 2 decades.

See more information about the transition in this Cincinnati Enquirer 6-24-1973 article.

Airplane next to bleachers on Trechter Field (undated) 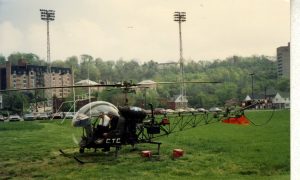 Helicopter on Trechter Field May 1989 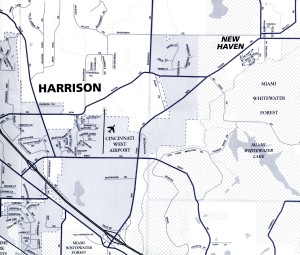 Map with the location of the Cincinnati West Airport 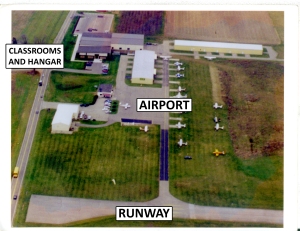 In August of 1995, Cincinnati State purchased the Cincinnati West Airport from McKenna Air Inc. for $1.1 million. As seen in the map, the airport is located in Harrison, Ohio between State Route 74 and the Miami Whitewater Forest.

To prepare the airport for academic programs, the college built a 34,000 square foot classroom & lab facility and a 10,000 square foot hangar. The Harrison campus opened to students in 1998. 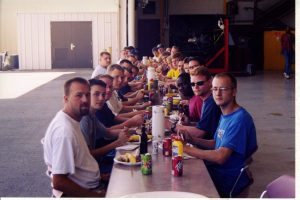 Graduates of the Associates program are prepared to take the FAA licensing tests for both Airframe and Powerplant mechanics.

The program continues to collaborate with key industry partners including CTL Aerospace, Executive Jet Management, GE Aviation, and others to develop innovative co-op and apprenticeship programs and to ensure the college’s curriculum reflects current industry needs.

Former President, Dr. Owens, delivers a congratulatory address to the 2013 AMT graduates and their families

Since the original purchase in 1996, Cincinnati State has expanded the Harrison campus with 2 new aircraft hangers, runway and taxiway pavement improvements, and the installation of an AWOS III automated weather system for pilots.

In the Fall of 1971, the program made history by conducting the first official scientific rocket launch of a mouse in Cincinnati. According to an article in the October 23, 1971 Cincinnati Enquirer, the mouse was named Zomar Ticonderous, and he flew to an altitude of 2190 feet before parachuting safely back to Earth. Zomar reportedly suffered no ill effects from the flight.

Aviation has traditionally been a male-dominated profession. However, in the mid-1980s, the College began intentionally recruiting women for its technical programs, including Aviation Technology. With the addition of the program’s evening course sequence in early 1987, many new students took advantage of this opportunity. One example was Debbie Stidham of West Chester, who enrolled in the evening program in April 1987. A discussion of her experiences appears in this January 1988 article. 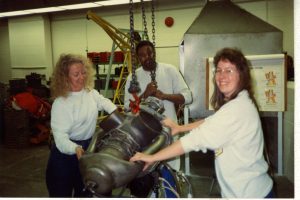 Aviation Students working on aircraft in the early 1990’s

In both 1989 and 1997, the college made local news when it had to ferry planes with a helicopter over Cincinnati. During the 1989 move, Cincinnati State had acquired a new Commander 680-V but without runways and a landing strip, the college had to airlift the plane to campus from the Cincinnati West Airport. Almost a decade later, this flight path was reversed as the college transferred its aviation maintenance program to the Cincinnati West Airport and ferried two of its airplanes via helicopter to the new campus.

Below are a couple of recent photos of Harrison campus. 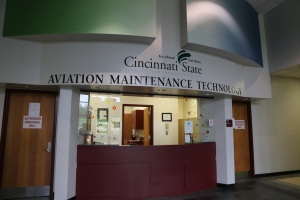 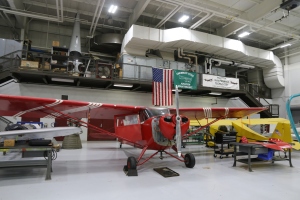