The 1977 course catalog welcomes students with a quote written by Benjamin Franklin in 1749:

“As to their studies, it would be well if they could be taught every thing that is useful, and every thing that is ornamental: but art is long, and their time is short. It is therefore proposed that they learn those things that are likely to be most useful and most ornamental, regard being had to the several professions for which they are intended.”

Cincinnati State’s advertising efforts embraced this idea, that an education could be focused on training for one’s chosen profession.

On January 1st, 1970, Cincinnati Technical Institute became an autonomous institution, no longer under the governance of the Cincinnati Board of Education. The document below illustrates the change from CCST to CTI, and promotes several new programs added to the curriculum.

The audio tracks below are examples of radio advertising produced by the college in the 1970s. This series of ads, directed toward non-traditional students, promotes the availability of evening courses at CTC.

In June of that year, Cincinnati Technical Institute purchased the Courter Technical High School property, where it had been operating alongside the high school since 1966, phasing out the high school completely in 1974. Between 1966 and 1976, the school grew considerably, adding over 30 programs and nearly 2,000 students. 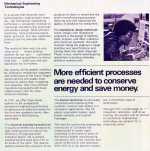 The technician shortage persisted in to the 70s. This brochure created for the Engineering Technologies Division (pictured in the gallery above) emphasizes the shortage of skilled technicians in the engineering field and promotes careers in sustainability. 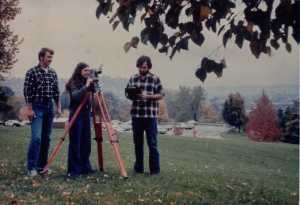 Images used in college advertising typically depicted students at work, either on the job, or in the lab. In this photo, three students in the surveying program practice using the equipment of the trade.