Tuesday Trivia: Did you know that June 29th is Johnnie Mae Berry Day? 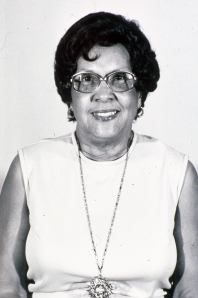 Back in 1979, the city of Cincinnati officially declared June 29th as “Johnnie Mae Berry Day”.  This is the day that Mrs. Berry retired from Cincinnati State (then called Cincinnati Technical College).  Here’s the press release from the college announcing the event:

Mrs. Berry served as the first full-time librarian at the college.  She was instrumental in designing the college’s library during her time here from 1972-1979.  The library was named in her honor at an event on June 29, 1979.  A plaque bearing her likeness and information is also affixed at the current entrance to the library.  If you’re interested in more information about the history of the library, check out our online exhibit.

In addition to being a librarian, Mrs. Berry also served as the first lady of Cincinnati from 1973-1975 when her husband, Theodore M. Berry was Mayor of the city.  Much about her life can be found in this article from March 5, 1972.  Mrs. Berry died February 4, 2002 and is buried along with her husband in Spring Grove Cemetery in Cincinnati.

So, wherever you are this Sunday, be sure to celebrate Johnnie Mae Berry day (which also happens to be my birthday).  And next time you use our great library, be thankful to Johnnie Mae Berry and everything she did to build it.

This is the official blog of the archives of Cincinnati State Technical & Community College. The blog will highlight important photos, documents, exhibits, and other items which chronicle the history of Cincinnati State.
View all posts by Cincinnati State Archives →
This entry was posted in Trivia and tagged Library. Bookmark the permalink.